A Vivid Illustration Of How Portfolio Theory Worked In 2017 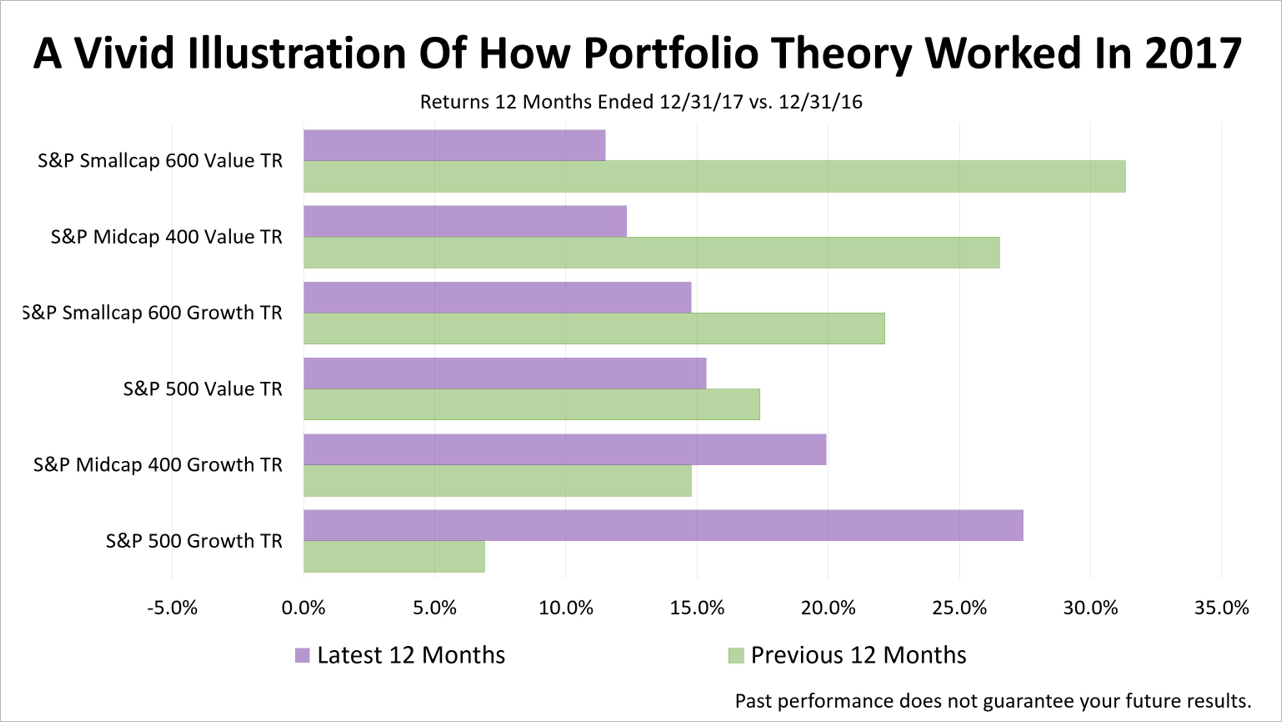 2017 was a mirror image of 2016 and vividly illustrates how portfolio theory worked in the real world last year.

Portfolio theory says the way to manage this rotation is to rebalance. At the end of 2016, for example, rebalancing would have meant lightening up proportionately on the most appreciated types of assets (i.e., small-cap value stocks) and buying more of the types of assets that lagged (i.e. S&P 500 large-cap growth stocks). The exact amount of each type of asset is set based on your personal preferences.


Usually, when you look at the returns of asset classes from one calendar year to the next, the performance seems random. There is no order to what occurred. The orderly reversal of leaders and laggards from 2016 to 2017 vividly illustrates a key concept in managing wealth prudently. 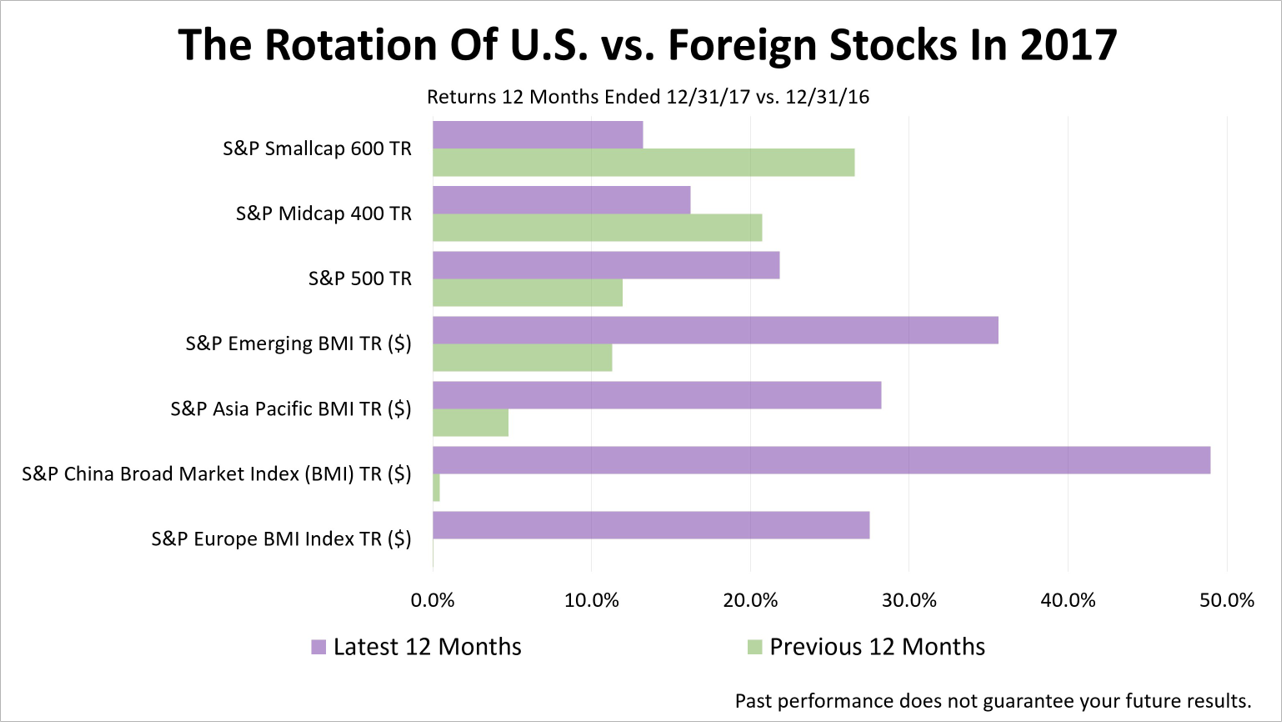 Classifying investments based on their characteristics and managing them based on historical behavior does not guarantee success but it imposes a discipline and methodology this firm believes in. Borne from the work of academics in the early 1950s, this framework for investing is now taught in the world's best business schools and is also embraced by institutional investors as a way of bringing order and imposing a quantitative process on wealth management.

Global stock market returns in 2017 versus 2016 reflected a similar mirror image, though not quite as close to perfect. In 2016, China's burgeoning stock market returned one-half of 1% and European bourses returned slightly less. Of these seven types of U.S. and foreign stocks, China and Europe were the leaders, with the nascent Chinese stock market skyrocketing 49% and European share values returning 27.5%. Meanwhile, the biggest winners of 2016, small-cap U.S. stocks, were biggest laggards of 2017. 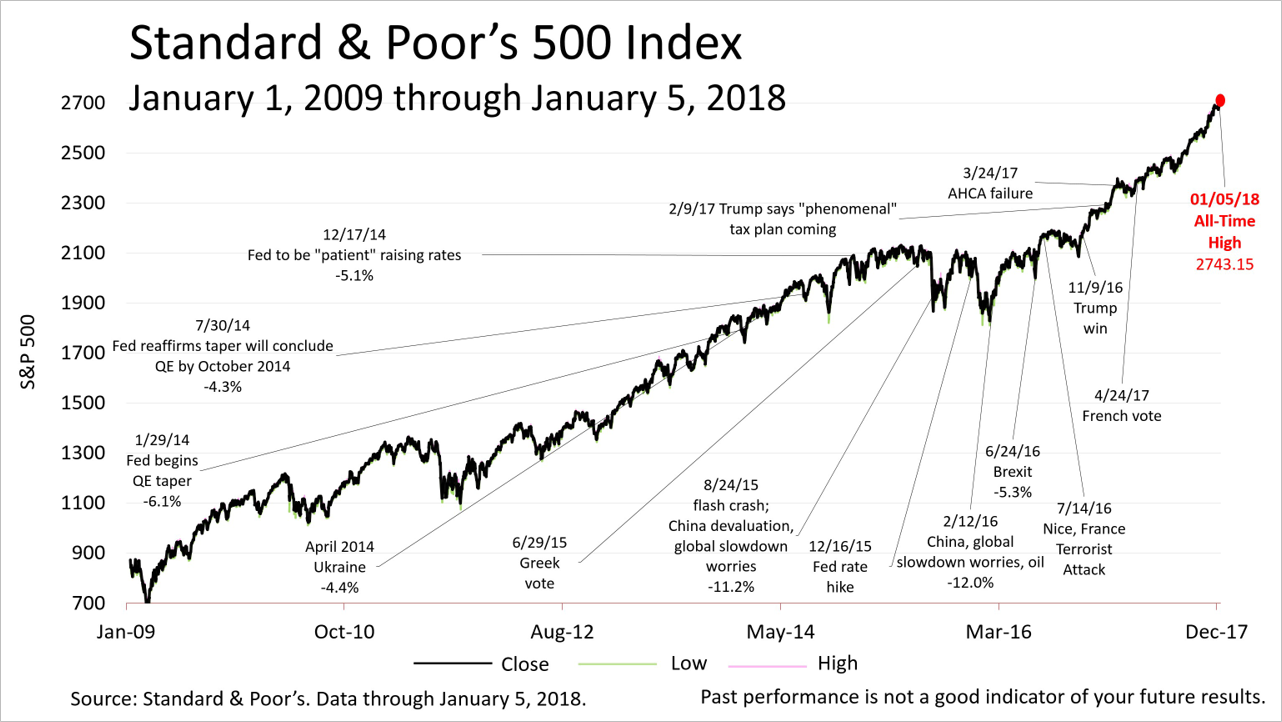 Despite the political crisis in Washington, D.C., the Standard & Poor's 500 closed the week at 2743.15, breaking its all-time high yet again.

Tax reform could accelerate economic growth and cause the Federal Reserve to make a policy mistake - by quashing growth or allowing the economy to overheat and inflation to surge. The political scandal in Washington, D.C. could devolve into a constitutional crisis and the nuclear standoff with North Korea could erupt with terrifying consequences. So, there is plenty to worry about, as always.


A 10% or 15% drop could occur at any time on bad news and the chance of a bear market decline of 20% or more increases as the eight-and-a-half-year bull market grows older.


However, the bull market could continue in 2018, and beyond, and prices could head higher.


The economy now shows no sign of slipping into a recession. Leading economic indicators signal a strong start to 2018, the world economy is growing in synchronicity with the U.S for the first time in many years, the new tax law is expected to bump earnings up by about 8%, and earnings ultimately drive stock prices.


Since you can't be sure what the future holds, seeing how well portfolio theory worked in the real world in 2017 may give you comfort and the confidence to stay committed to a program of long-term wealth management and financial planning.

This article was written by a veteran financial journalist based on data compiled and analyzed by independent economist, Fritz Meyer. While these are sources we believe to be reliable, the information is not intended to be used as financial advice without consulting a professional about your personal situation.

Indices are unmanaged and not available for direct investment. Investments with higher return potential carry greater risk for loss. Past performance is not an indicator of your future results.

This article was written by a professional financial journalist for Advisor Products and is not intended as legal or investment advice.