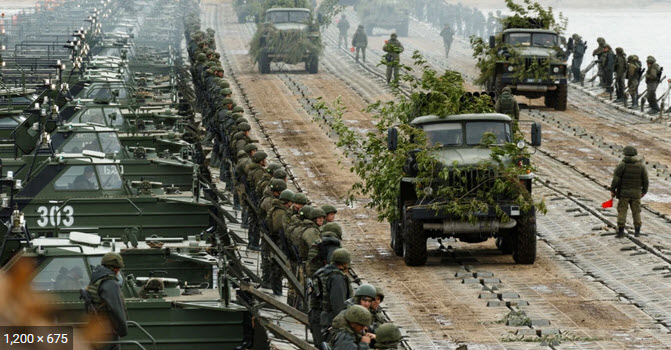 The possibility of war looms as Russia's build up of troops and tanks grow on the Ukranian border. As if that were not enough, inflation stats coming in at 7.5% provides continued proof of how wrong the Federal Reserve has been. Markets hate uncertainty and "uncertainty" is the flavor of the current moment. Russian-Ukranian tensions have been on the rise for weeks now. That is not news. A diplomatic resolution vs a military invasion has been the more expected outcome and that is now in question. Has that been fully discounted by the markets. Some say no.

A military build up of such magnitude is cause for alarm and certainly a strategic move by Putin to force an outcome whether that is to enter into negotiations and reach a new military understanding between Europe, Russia and the USA or potentially, an invasion. An invasion is costly on many fronts for Russia, not least of which will be the heavy sanctions that will be imposed on them by USA and Europe. War is costly and it is questionable whether Russia can afford such a prolonged entanglement. As such, it seems a high risk option for Putin and therefore less likely of an outcome to us. However, if the strategic goals for the build up were originally to negotiate a new military understanding in the region and these completely fail from Putin's vantage point, who knows what his next move could be.

In the midst of this, inflation continues to rear its ugly head. Supply chain issues abound. The Fed has to act and based on the most recent data, the market worries it will have to act even more aggressively. As we have said before in previous blog posts, we believe the Fed will act and a rate increase of at least 25 basis points is all but assured in March. It is again unlikely in our estimation that the first rate hike will be more than that. Based on our research supply chain issues will start to be addressed in the second half of 2022. However, progress may not materialize until later than the market would like. In this sceanrio more pressure will be put on the Fed to keep raising interest rates which they will probably do.

How many rate hikes will we get? JP Morgan and other large banks are forecasting 4-8 rate hikes. We believe the final number will be more conservative and at the lower end, especially if there are signs of supply chain issues resolving or/and the economy slowing.

In the interim, the above headlines certainly will make for more volatile market conditions. Oil will undoubtedly swing higher if Russia invades Ukraine. Markets will likely fall on news of such happening in combination with fears of larger rate hikes by the Fed and eventually, a new market equilibrium will be found from which markets will asses forward looking earnings. These are likely to remain strong on the whole with some surprises as the economy recovers from COVID. In addition, interest rates remain at historic lows (even with several rate hikes to be expected) and the yield curve is still net positive incenitivizing banks to keep lending. Trillions remain on the sidelines waiting to be deployed. As long as bond yields are less than inflation, these represent a net loss return on investment. Growth stocks will remain a significant way in which to mitigate for inflation-adjusted returns.

Taking a longer term perspective of the markets allows you to absorb the current news and see past it.

Russia, Putin and The Impact of War on the Global ...
Are Higher Interest Rates The Harbinger of Gloom f...